Finding the Dog in Noh, and Leaving it Alone

“A lot could be said about how the text is structured, what it takes from noh and what it leaves alone, and how the English language conditions the narrative flow.”- David Crandall 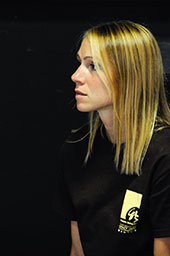 In David Crandall’s fascinating post, Finding the Dog, he expressed the hope that I would talk about some of the above topics in my own contributions to this blog. Basically, David has thrown down the gauntlet for me and not for the first time in our wonderful collaboration over the words and music of Zahdi Dates and Poppies. One evening, several days before we were going to stage a workshop version of a scene from Zahdi, David called to say that he needed “about ten lines of warrior hell poetry” for his score. He had them by morning, I’m proud to say, and I rather like that moment in the play. What he needed musically was also a statement of suffering that the play required.

I have always written best when I have an assignment, either thrown at me by someone else or self-imposed. This post is the result of both David’s assignment and my own (to write a blog before my toddler wakes up from his nap) with a dash of inspiration drawn from David’s “Finding the Dog,” which I highly recommend. One of the things that fascinated me about his post was the way he described dividing his canvas into vertical fields, cutting up images of a painting, and pasting them into the fields. That methodical artistic process sounds like an assignment I could try, even with limited painterly ability. And the result, Jennifer Dreams Wisteria, is gorgeous, as is the dog David unintentionally, unknowingly created.

The writing of Zahdi Dates and Poppies began with a similarly methodical assignment. In order to learn about the sections (dan) that combine like my son’s legos to build noh plays, I set myself the task of replicating those sections down to the specific number of syllables in each line. Since the opening song (shidai) is usually repeated by the chorus in a whispering echo, that was what I wrote, and I made sure those lines were worth repeating poetically and thematically. This structure, particularly all the syllable counting, was maddening at first. But, I had two driving desires or two dogs in the fight, so to speak: I wanted to learn the structure of noh plays so that I could write a better book about the noh theater (see the webpage for my forthcoming book Learning to Kneel). And more importantly, I wanted, no needed, to face the ghost of a man my husband killed while deployed to Iraq as a fighter pilot. I needed to explore the impact of such deaths on those who do the killing and their families, and I had struggled to do this in my poetry and other writing. The warrior play tradition in noh often features the ghost of a defeated soldier telling his story, facing his enemy, at least in spirit, and sometimes finding peace in the process. This ancient genre of warrior plays had something to teach me, I was sure, about finding peace.

So, I followed the noh warrior formula, hammering my story into those structures and syllables. It was a discipline, a labor of precision. I think of this process as searching in noh for the dog, the hidden beast of wisdom that would help me give stage life to that ghost, my ghost. When I was finished, I seemed to have built a neat little house in which nobody had lived, nobody could ever live, particularly not a messy dog. So, I went back into the play, loosening the structure, opening the windows, demolishing some rooms, to make space for my characters and for me. Often, this meant searching through the play for the

poetry that was all the more tense and chiseled for having been forced into a rigid structure. I let those poetic images expand and then cut the material that didn’t feel alive. The emotions I needed to explore in the play were already present in the images of burnt Zahdi date palms and poppies that would open in the sun’s warmth – and in all the resonances and permutations of those images that the exacting process of trying to write in the noh form had revealed.

Zahdi is not a noh play. I have always been more interested in what noh could teach the contemporary world about art, performance, and beauty than in following noh’s ancient rules. I have spent many years studying and writing about the noh theater, even taking lessons in the performance technique with teachers from Theatre Nohgaku and in Tokyo with a beloved master teacher, but I am not part of the noh world and its rather regimented institutions. I can study and admire the traditions, but they are not mine. And I don’t mean to imply that I believe in some essential understanding, based on race or culture of birth, that would prevent me from becoming part of that world. As I write these sentences, I am aware that there are warning signs everywhere flagging my orientalism and exoticism, long histories of cultural appropriation, and my privilege as a white American. I take those warnings very seriously and then proceed, as humbly as possible, with the many lessons noh has taught me.

And now my own little puppy is calling me away.

2 Responses to Finding the Dog in Noh, and Leaving it Alone