Ryushin-sensei is lean, tall, grizzled. His gaze is gentle but firm, his voice mildly inflected with a hard-to-place pan-European quality. As he becomes more involved in conversation, his active hands reveal the level of excitement with which he engages in meaningful dialogue. He is immensely well-spoken, clearly well-read on a wide variety of topics (ancient and contemporary), ready to respond thoughtfully to our every inquiry. He is a sensei and the abbot of Zen Mountain Monastery, where Theatre Nohgaku will be performing Sumida River on Sunday.

The abbot had expressed an interest in meeting with the troupe today over lunch so that he might answer whatever questions we had. And we asked many. Gary Mathews asked about seeming contradictions in the section of the Heart Sutra chanted by attendees at the monastery’s morning service. Richard Emmert asked about the abbot’s own journey to zen and about the circumstances of his coming to the United States. Elizabeth Dowd asked about the importance of liturgy in monastery life, noting that childhood experiences of Catholic liturgy were doubtless one of the reasons that she was so drawn to the formalized, quasi-liturgical performance of noh. I asked a more mundane question: “Do you mind if I take your picture while you talk?” 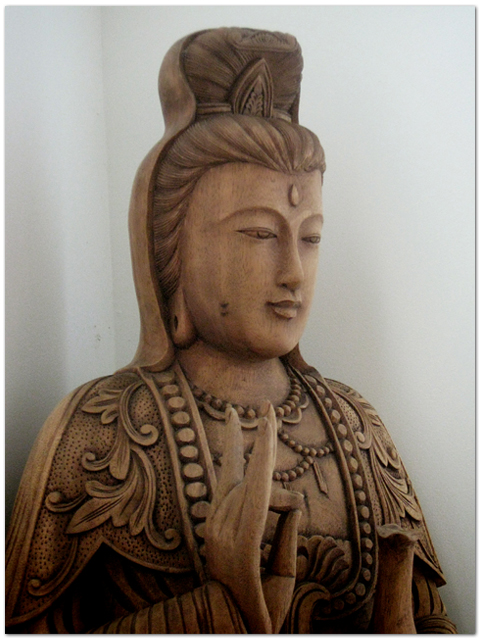 The abbot listened intently, patiently, to each question, and for each he had a response, sometimes lengthy, sometimes brief, after which he would return to his lunch. There was no filler in his speech, no hemming and hawing. His responses were well considered, thoughtful, thought-provoking. The people at our table were the last in the meal hall and the abbot’s plate the last to be emptied, though we continued talking well after that was gone. I left the lunch meeting with the feeling that I had just been treated generously; this is a feeling that great teachers seem to generate effortlessly.

But Ryushin-sensei’s generosity didn’t end there. He had also decided to open up the “dokusan line” to members of Theatre Nohgaku. “Dokusan” is private face-to-face teaching in zen, where the student sits before the teacher and works toward better practice. In fact, we already knew that the abbot intended to offer us these individual interviews, because the previous day H— had explained the etiquette involved in receiving it. The abbot, seated in an “office” adjoining the zendo, rings his bell. Then the abbot’s attendant announces to whom the dokusan line is open, and those called walk briskly over to a long rectangular mat and sit seiza (lower legs folded under upper legs) in a row. The first student in line goes into the office, gives two respectful bows, and says, “I am [name], and my practice is [whatever it might be, but “counting” for novices, which includes TN members].” Then it happens: teaching. Once it’s concluded, the student gets up, opens the door to let the next student in, they make a bow together, and the first student returns to zazen in the zendo.

So, at the conclusion of our lunch, the abbot let us know that we would be invited to join the doksuan line during evening zazen. In the afternoon, TN did its dress rehearsal of Sumida River, with the monastery residents in attendance. We were made to feel very appreciated, and the afternoon seemed to effervesce with positive energy. There was even a chance to rest, if you can imagine. Then came dinner and zazen, and with it, the promised dokusan line. Somehow I ended up first in line, and although my bows were in order, I completely forgot my lines. I opened with a not particularly profound “hello.” Now, if I understand the rules correctly, I’m not allowed to say what transpired during my private interview with the abbot, but I can at least say that the same generosity of spirit, the same willingness to entertain whatever question might arise that characterized the lunch meeting also held sway during the private session. As a teacher, I am taught by this. A teacher teaches by listening to questions, by finding the kernel of a real question inside the awkward language that the student employs. Maybe it’s that the teacher remembers what it felt like to be a student and exercises compassion on a fondly recalled earlier version of the self. Those qualities happen to be informed by zen at this monastery, but any teacher, of whatever religious or philosophical persuasion, would do well to aspire to them.