A third category play by an unknown author

One autumn a Monk was visiting some famous sites in Kyoto. After seeing and enjoying the many shrines and temples there, he went to see the changing foliage at Sagano. While in Sagano he was told of the Shrine in the Fields, the Nonomiya Shrine. Intrigued by the story he felt he should visit that place and offer up a prayer.

Nonomiya was a well regarded shrine, since it was here that many shrine maidens of Ise went first in order to purify themselves before their appointed task. When the Monk arrived at the shrine he was struck by the view of the impressive torii gate and the rustic brushwood fence, and reflected that it appeared just as it must have in olden days. The Shrine in the Fields was a tranquil place, and quiet in the early evening amidst the bronze and golden leaves of the fall.

It was said that the deity of Ise had no discrimination between Buddhism and Shintoism. The bountiful nature of Amaterasu Ōmikami permitted the spread of Buddha’s law, and the Monk was pleased to visit Nonomiya Shrine and feel its connection with Ise.

Just then a Woman arrived quietly through the gate. Carrying a branch of sakaki, she was elegant in appearance and gazed longingly at the wilted final flowers of the season. Sighing, her eyes were moist with tears, knowing that soon the wasted blossoms would blow away in the autumn winds. It had come to pass that the Woman visited the shrine on the same day each year. A certain obsession drove her to return to this place, and she thought of how temporary the world was.

The Monk, who had been sitting among the trees observed the elegant Woman and wondered aloud who she might be.

The Woman spoke to the Monk about Nonomiya Shrine, saying that many young princesses who were selected to serve at Ise came first here to purify themselves. She said although these customs had been in the past, that she herself came every year on the seventh day of the ninth month to commemorate and to pray. Not knowing whom the Monk might be, the Woman remonstrated him, telling him that his appearance at the shrine at this time was an affront to the deity and that he should be promptly on his way.

Declaring that he was no one of importance, only someone who had cast aside the world, the Monk instead made further inquiry of the Woman: why did she return to Nonomiya just at this time?  The Woman replied that it was because it was on this day that Hikaru Genji had visited the shrine, and that he also had carried a sakaki branch. The Lady Rokujō was present, and seeing the resplendent Genji offered up a poem about the branch. In hearing the old poem repeated by the Woman, the Monk thought it was tasteful indeed.

In the woods around the shrine, under the spreading pines, the worn footpaths were strewn with fallen leaves. The fields of long grass had withered. In looking at the shrine in the gathering autumn dusk the Woman was overcome by emotions of loneliness.

Wondering about the Lady Rokujō, the Monk asked the Woman if she knew anything about her. Yes, she replied, the Lady was once the wife of the Crown Prince – he was the younger brother of the Emperor Kiritsubo and they had enjoyed their life together. One day she would have been Empress. But, as all meetings are only the beginning of departure, all too soon her husband died. Not long after the Shining Prince, Hikaru Genji, courted her in secret. He visited her often and exchanged tenderness with her, but the time came when his visits were less numerous, and finally when he failed to visit her at all. 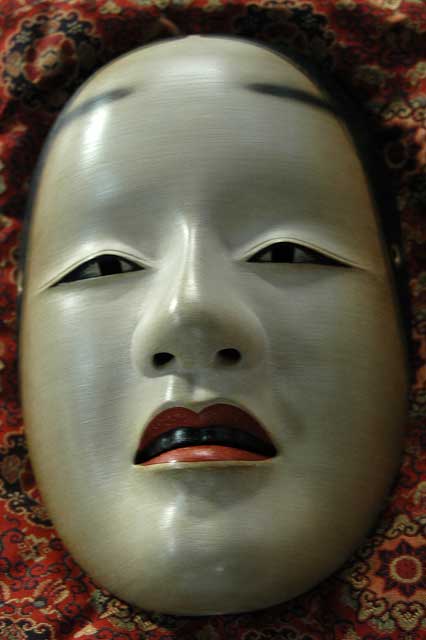 Even after his heart had changed, Genji still had some feelings for the Lady Rokujō. The Lady had fled from the capital and was staying at the Nonomiya Shrine while her daughter underwent a year of purification. Genji made the long trip from Kyoto in order to speak with her most sincerely, although he was burdened with great sadness knowing his intention to bid her farewell. Lady Rokujō read a poem to her former lover, one with deep meaning, and she wondered if he would remember her as time passed.

Struck by the tone of her words, the Monk asked the Woman for her name. At first she demurred, saying that she was unworthy of mention and asking that the Monk please pray for her soul. Why should I pray for your soul, inquired the Monk? Having little to hide by this point the Woman revealed that she was the spirit of Lady Rokujō – and so saying she disappeared in the gathering twilight.

A Local Man on his way to worship at the shrine happened by and saw the bewildered Monk. The Monk described what he’d just witnessed and the Man spoke to him about the Lady Rokujō and Hikaru Genji and their unfortunate exchange at Nonomiya. In hearing about the spirit of Lady Rokujō, the Man encouraged the Monk to stay and pray most sincerely for the release of her obsession. The Monk decided that he would heed the Man’s advice, and so began to pray through the night.

Thoughts of the past filled the Monk’s mind, of days and years gone by in this place. He bent his attention to consoling the heart-broken spirit of Lady Rokujō, and prayed most sincerely for her comfort. Bathed in the faint moonlight that lit the shrine, the Monk could hear the sound of wheels approaching. It was an ox-carriage carrying the spirit of Lady Rokujō. Once long ago at the Kamo festival the Lady had ridden in such a carriage.

The roads were full of carriages the day of the Kamo festival, and no one knew Lady Rokujō was riding in hers – the bamboo blinds were drawn. Amidst the crush of people, animals and vehicles the Lady Aoi, Hikaru Genji’s formal wife, approached in her fine carriage, her servants shouting to all that they should move out of the way. Lady Rokujō’s carriage was small, and at the side of the road with nowhere to go. All of a sudden a group of men gathered around Lady Rokujō’s carriage and grabbed at the shaft and wheels and rudely shoved it out of the way. Having lost her place, Lady Rokujō realized that she was powerless while confronted with Genji’s true wife. Now, even after all this time, the Lady found herself riding in her carriage; trapped in a moment in time that she could find no release from. Please, she begged the Monk, pray for me. 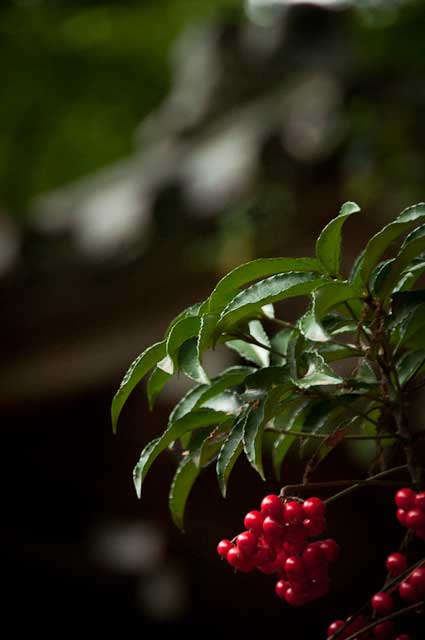 Remembering the past with fondness, yet deep sadness. Does the moon over the shrine also miss the past? Lonely, like a single drop of dew on a leaf? To the gardens of Nonomiya the Lady Rokujō has returned over and over. At the ancient shrine the crickets still sound, and in the night the wind blows a song of regret through the trees. The Lady could not bring herself to release the wheel of life. Suffering still. The world – like a house on fire – if only she could ride her carriage and escape.

In the pale light of the moon over Nonomiya shrine, the Lady Rokujō rides in her carriage on the seventh day of the ninth month.