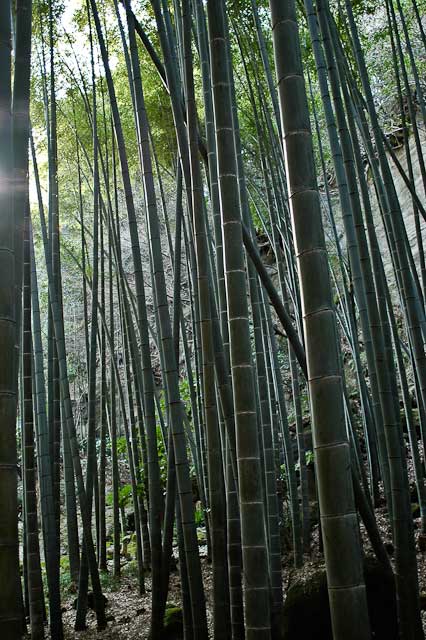 On a clear spring morning, after a night of passing rain, the fisherman Hakuryō and his companions traveled over the mountains and made their way to Miho-no-Matsubara. They compared the rising clouds with the rising waves, and looked out over the fishing boats in the bay.

Having arrived at Miho-no-Matsubara they discovered that flowers appeared to be falling from the sky, and ethereal music and pleasant fragrances filled the air. Finding this strange Hakuryō looked out at the peaceful evergreens along the shore, and discovered a magnificent robe hanging on a pine branch. Examining it closely he saw that it was of amazing colors, and smelled wonderful. Realizing that it was no ordinary robe he decided that he would take it home with him to show to the elders of his village and finally to keep it as an heirloom in his family.

Suddenly appearing before Hakuryō was a young woman, breathtaking and radiant, her hair adorned with blossoms. Politely she told him that the robe was hers, and wondered why he was taking it with him. It was a celestial feather robe, one not meant for humankind she said. She asked him to please return it. If this really was a celestial robe, realized Hakuryō, then the radiant young woman must be 天女 , a Celestial Maiden. Hakuryō told her that he meant to keep the wonderous robe, that it should be enshrined as a treasure to bring good fortune to the realm.

The Celestrial Maiden was mournful immediately. Without her robe she had no wings to fly back to heaven – she begged Hakuryō to please return it. Being only a fisherman, Hakuryō felt he didn’t wish to return it, its value was too great. He told the Maiden, no, he would not give back her robe.

Without her wings the Maiden was a pitiful creature. Longing to fly off, but unable to do so, she wept bitterly. She was a heavenly being and not meant to remain on the earth. Despite her tears and her deep sadness Hakuryō refused to give up the garment. The Maiden’s tears fell like pearls to the ground, the flowers in her hair wilted, and as she looked up into the clouds she could see no path home.  Listening to the sky she could hear a flock of geese flying off to the north, it made her think of the celestial kalavinka birds and how their voices once would have guided her home. Her loss was complete, and her despair utter.

Hakuryō’s heart was finally touched by the Maiden’s great sadness, and he decided to return the robe to her. He told her that he would give back her garment, but only if she would dance a celestial dance for him. The Maiden agreed at once, saying that she would give him the dance that was performed in the Palace of the Moon, but that in order to do so she first needed the robe. Fearing deception Hakuryō refused, telling her that if he gave her wings back to her that he knew she would simply fly off without fulfilling her new promise.

The Celestial Maiden told him that deception only exists in the waking world. In heaven there are no lies. Chastised by this revelation Hakuryō returned the robe at once. Donning the feathered robe the Celestial Maiden waved her long flowered sleeves in the slight wind and in joy began to perform the heavenly dance.

In the days not long after the creation of the world, when the ten directions were named, the Palace of the Moon was carved. Two teams of Celestial Maidens, one robed in flawless white and one in deepest black were charged with the waxing and waning of the moon. The Maiden who danced for Hakuryō was one of these, and had come briefly to the Earth to dance the Suruga-mai in the Eastern Province. With grace and beauty she danced, her sleeves sweeping like swirling snow or fleeting white clouds. The moon shone brightly over the spring landscape, the waves were calm and through the pine trees a gentle wind blew. Heavenly music of shō, flutes, koto and harps rebounded in the sky. The Celestial Maiden offered prayers for the Emperor of the Moon.

After dancing slowly, then swiftly, the Maiden began to rise up into the sky. She scattered precious treasures upon the land; gems and gold, silver, coral and made a fervent wish that Amita Buddha’s promise to save all living things would be fulfilled. Her great wings unfolded, her feathers filled with the wind and she flew off over Miho-no-Matsubara, beyond Ukishima-ga-hara and at last over the snowy peaks of Fuji-san. Through the sky she flew, back to her home in the Palace of the Moon, her hair festooned in flowers and the fragrant feathers of her recovered robe exquisite to behold.