Posted on November 7, 2012 by Theatre Nohgaku

An official of the Emperor, Kiyotsura, has been charged with an odious task. He has been ordered by the Emperor Engi to take the blind Prince Semimaru to Mount Ōsaka and abandon him there. Kiyostsura looks with pity upon the Prince, wondering what happened in his previous life to bring about such bad karma. Emperor Engi has decreed that Semimaru must shave his head and renounce the world. He is powerless in the face of such an imperial decree. Departing Kyoto in secret, Kiyotsura and his party accompany the prince with heavy hearts.

Having arrived at Mount Ōsaka, Semimaru and Kiyotsura discuss his fate. Kiyotsura is devoted to the Emperor and feels him to be very wise and just, but cannot understand the decision to abandon the blind prince. Semimaru is more prosaic about his plight, indicating that he must not have fully devoted himself to Buddha’s Law in his previous life. By abandoning him on the mountain, the Emperor offers him the opportunity to purge his past sins in his current life and to help him on into the next. Semimaru’s belief is that his Father’s seemingly merciless act is in fact one that is derived from sublime compassion – he asks Kiyotsura to understand, and to not feel too badly.

Kiyotsura proceeds to shave Semimaru’s hair. He relieves him of his royal raiment lest he should be set upon by bandits for appearing rich. He leaves him with a wicker hat and straw rain coat, and provides him with a cane for his support. Contemplating the transience of life, Kiyotsura stifles his tears and leaves Semimaru behind, heading back to Kyoto. Clutching his biwa lute, and his cane, Semimaru is overcome. He stumbles and collapses crying.

A kindly man from the area, Hakuga no Sanmi, is aware of Semimaru’s noble birth. He pities the blind prince and makes a straw hut for him, urging him to stay within to keep out the rain and the damp. Moved by the prince’s circumstance, he indicates that he will visit the prince often to see if he needs help.

Meanwhile in the Capital Semimaru’s older sister Princess Sakagami has gone mad. Wandering forth from Kyoto, she see’s children of lower birth taunting her and thinks of how the world is turned upside down. Her long black hair is disheveled and unkempt. She wonders about her karma, and how it is that even though she is of noble birth she is relegated to the life of a commoner. In her mind everything has become reversed. She performs a short dance of anguish.

Sakagami laments as she leaves Kyoto. Crossing the Kamo river, and then the Shirakawa stream she arrives at the gate of the city. In her confusion she passes numerous sites only to realize that she has reached the village of Yamashina as the sun is setting. She asks the villagers not to revile her, wanting them to understand that although she is mad she is still pure of heart. She sees her own reflection in the waters of Hashirii and thinks of how awful she looks. The waters reflect truly, she believes, and shows that in her disturbed features she is indeed insane. 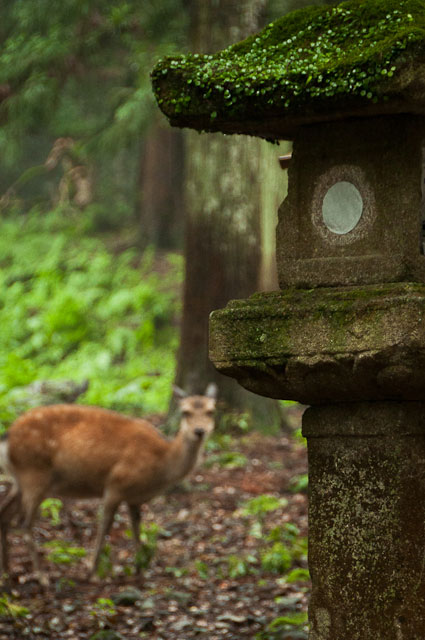 As the princess proceeds she reaches Mount Ōsaka, and can hear the sound of a biwa lute. Within his straw hut, Semimaru is playing his lute and contemplating his loneliness. Sakagami is struck by the skill of the playing and wonders how or why it should be heard in such a dismal place. Who would have the skill to play thus? As the rain drums upon the straw hut, Sakagami approaches and listens to the music in secret and in silence.

Semimaru hears her approach, and asks whether it is his friend Hakuga no Sanmi outside. Sakagami hears her brother’s voice, and asks if it might be him. In surprise Semimaru realizes it is the voice of his sister and flings open the door of his hut. They take each others hands in sad recognition. Prince and princess lost to their royal station greet each other in the rain on a barren mountain path.

The siblings talk of the great bond between them, and of the fate which has brought them to this place. At one moment they lived in the royal court in luxury, but now they are cast out. They speak to each other as lovers might, remembering when times were better – but now they can only cry, their tears turned to rain.

After a time, Sakagami decides she must leave. She says goodbye fondly to her dear brother. They exchange endearments and speak of how they will miss each other. Semimaru stands in the doorway of his hut, listening to his sister depart, hoping that the Ōsaka barrier will be closed to her so she will not be able to leave. He stands by his hut blindly listening to his mad sister depart.