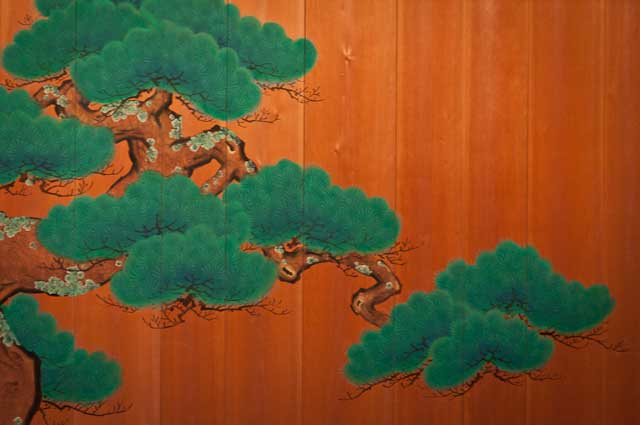 Oshirabe. The flute and drums begin, unseen by the audience, their aural sigils reach out in preface to the story about to unfold. In a line the musicians sit, just beyond the edge of the agemaku. Get ready. Be prepared they seem to say.

“Oma-ku” [おまーく] the actor utters and the curtain is raised onto another world. On the surface a world comprised of foot-polished hinoki and upright pillars, below the surface an emblematic language of our lives. A language comprised of words, songs, music and movement translated by noh into a repeated telling of the commonality of human experience: love, loss, anger and redemption.

In the near-twilight of the kagami-no-ma [鏡の間], the actor stands poised at the agemaku [揚幕.] On either side of them the koken kneel, grasping bamboo poles attached to the curtain in anticipation of the request to raise it and create entry. Swiftly or serenely, in whole or in part pending the emotional intent of the play. Having dressed off-stage and 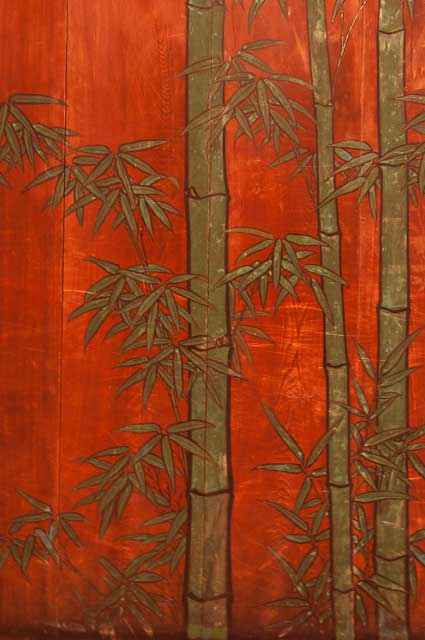 then donned the mask in the final preparation of the mirror room – there is a singular moment of quiet, of not-quite aloneness before uttering the request:  honorable curtain, offer entry into the other world.

The curtain: a brocade of five colors, the primary elements of the universe; wood, fire, earth, metal and water. Through its division will pass the spirits of the living and the dead, warriors, women, fearsome creatures and the Gods themselves. This fabric may represent the separation between preparation and action – all that is gone before in practice, rehearsal, training and the “moment of the now” in bringing those hours to culmination with the participation of an audience. It may also represent the division between the profane and the sacred, its very thinness emblematic of the artificial separation between these states of being.

The stage floor: worn somewhat down the middle from repeated suriashi in support of kata. Dented slightly here and there from the tsuba of dropped katana, a vague marring near the shite pillar from the shaft of naginata once wielded by vengeful ghosts. From a distance the stage appears smooth, pristine, in practice a working surface hewn for

singular purpose.  Our own appearance may be the same, from a distance regular and well formed, up close covered in minute but repeat scars of the exposure to time.

The actor: swathed in silk or hemp, bound by cord and obi, tasting their own breath as they wait clad in a mask of painted wood. Vision curtailed to the smallest of holes carved out to form the eyes and standing in stillness before the curtain. Waiting. Soon to join the hayashi and jiutai in an act of unique creation. These people, these schools, this play, this audience – performed only once and once finished lost in the vastness of temporal passing. Only memory.

“Oma-ku” the actor utters. The curtain is raised. We may enter another world.