Happy Stone –
A Sixth Category Play about a Waki

Seeking enlightenment about the Waki role in Atsumori, I am going to the green room in Bloomsburg University’s lab theatre, which NTP uses for drum lessons. From the bagel shop on Main Street I must cross a treacherous intersection and walk uphill. I have an appointment with Jubilith Moore, who will be performing the Waki role in Atsumori: the priest Rensho, formerly the warrior Kumagai who killed in battle the young nobleman Atsumori.

I have arrived at the green room. Waiting for me, wearing her signature cap, is Jubilith. Is that rice and beans she’s eating for lunch? Since we have seen each other earlier in the day, we skip over greetings and get right to it.

I have some Waki questions for you, Jubilith, and for Rensho.

James: First, you: how many NTPs have you been to?

Jubilith: This might be my tenth one. I started in ’99. I’ve missed a few, so this is either my ninth or tenth.

Jubilith: The first in Japanese. I played the waki in Pagoda and in Pine Barrens.

Jubilith: I did the second part shite in Funabenkei, NTP’s 2009 Noh in Park. Six minutes of dy-no-mite. That’s the only time I played the shite.

James: Has playing the other waki roles informed how you play Rensho?

Jubilith: Absolutely! There are a lot of musical conventions which translate completely, and now I get to do the shidai and the michiyuki in Japanese, I’ll have a better understanding of the music when next I do Noh in English. Practicing how to sing the shidai, how to sing with the drums, it helps.

And just the sense of the waki as a witness, as someone who facilitates the story, has been helpful.

One of the challenges has been to find a “waki sound”. The sound is different from the shite, to my ears. When we performed Pagoda in London, someone came up to me and asked “So, what waki school are you?” And I had to say “I don’t have an answer for you.”  I’m not of a waki school, and clearly you could tell. It’s a particular training, which exists onstage with the other forms, the shite and the kyogen.

James: How did you prepare for rehearsals, other than memorization? Did you know what your movement would be, before you got here?

Jubilith: No. I had an idea. If I had thought of it, I probably would have figured “Oh, I’ll probably be doing this move and that move.” I read histories of the war, and several translations of the Atsumori play. But mostly I spent my time memorizing.

It’s usual to identify with the shite, but I have always loved Rensho. I feel this is as much his story as Atsumori’s. Eight years pass since his killing of Atsumori. That was a life-changing moment for him, and he has prayed for him every day. He becomes a priest, renounces the world, and keeps his promise to return to Ichinotani. He’s trustworthy, he follows through on his promise after all those years.

I have loved this play since the mid-90’s. It’s one of the first Noh plays I ever read and I have loved it deeply.

James: How long has Noh been a part of your life?

James: Speaking of a life changing moment, that must have been one for you, discovering Noh and deciding “I’m going to follow through with this.” Like Rensho.

James: What would be your art monk name? What does Jubilith mean?

Jubilith: It means “happy stone”, which I think fits very well, I like to think of myself as happy, yet grounded.

James: That could be your monk name. Happy Stone.

(At this point there would be an Interlude. Sorry, actors, it hasn’t been scripted yet, but “We’ll have to find some time to work on it”, as the saying goes. It will possibly take the form of James getting a cell phone call from the local T-shirt store, that the shirts are ready to be picked up. The T-shirt guy comments on the Atsumori publicity picture in the newspaper. He wishes us good fortune for nice weather and good crowds. I remind him of the start times and location in Town Park; he is gracious but non-committal. When I hang up, I resume my conversation with Jubilith, now transformed into her real self, Happy Stone.) 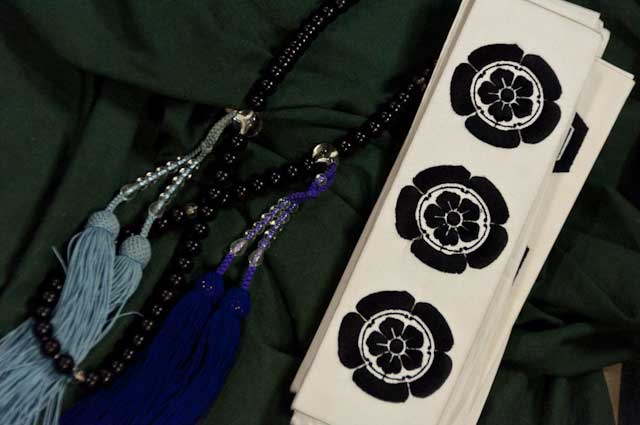 James: What do you think this play means for modern audiences?

James: Okay, you want to think about it? We can come back to it. Let’s talk about journeys. So many stories and plays, even in western literature, use journeys as a plot device, to get a character out of their routine so that something new can happen to them.

Happy Stone: Right. When you’re a kid they always say: “Go out, broaden your horizons, walk in other paths”. That’s how you grow.  In Noh, the priest is always the one who is traveling in the world, yet the priest has renounced the world that he’s out walking in. I find that interesting. He’s supposed to have renounced all his worldly attachments. Rensho has this attachment to returning to Ichinotani. Even though a priest, he follows through with a warrior’s conviction to keep his promise. The moment they made eye contact in battle, that was a life changing moment for both. He says: ‘In my lifetime I was Kumagai, now I am Rensho” 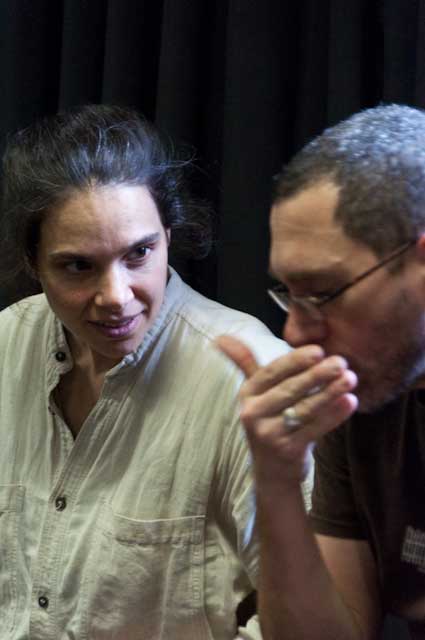 James: When they pray together, I find that really beautiful.

Happy Stone: Its really moving. They have a karmic connection. They need each other.

One question I have is: Atsumori is not in warrior hell, so that’s different from a lot of warrior plays. But he has the line “my sins are so deep, wash me clean”. So what is his sin?

Happy Stone: Yes he’s a kid, and we could believe that he did some killing in battle, or that he’s angry with Kumagai for killing him, and he’s still attached to his anger.

I thought yesterday’s rehearsal was really moving, and I found myself thinking: “Gosh, what if all the warriors in the world became priests?” I thought that was a beautiful idea.

So to get to your question of the play’s meaning for contemporary audiences, it’s a pacifist play, about a man who, in a moment, sees that the purpose of his whole life up to that point, has not been the right path, and with clarity he says “I’m going to change”, and he follows through.

James: How does time pass for you in out there?

Happy Stone: Hmmm. It’s altered. It has a jo-ha-kyu. When it starts I feel like I’m moving in slow motion, and the end of the play comes and its like: “what happened?” Its really cool, it goes very very quickly, as I become more familiar with the arc of the story. There’s a lot of expansion so you’ll be in a moment and if you choose to see the moment it will be quite expansive. If my blood sugar goes low and I space out, then the moment goes by in a flash and I’m racing to catch up with it.

James: Rensho starts the play: he’s the first character we see, and the last one we see. I’m glad you get the last exit because it gives me time to think about Rensho’s experience. I know the text is over, but what are Rensho’s thoughts then? When you’re exiting, is it Jubilith going to the dressing room or Rensho going somewhere, and if so, where?

Happy Stone: Its Jubilith going to the dressing room. Definitely. 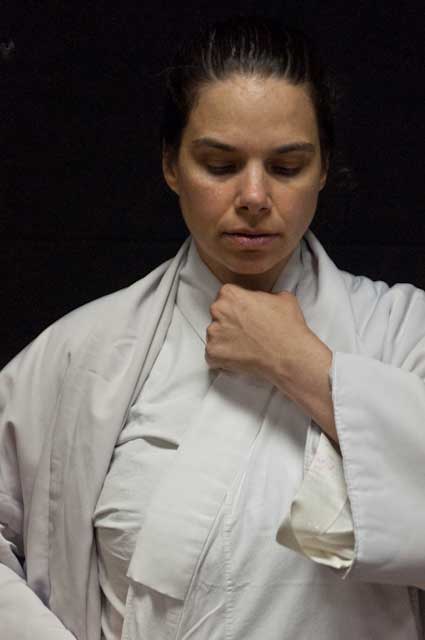 James: Then how do we end Rensho’s story?

Happy Stone: I’ve been thinking about this. The words I keep hearing in the text are “flute” and “thank you”.

Atsumori enacts the moment when he could have killed Kumagai. He has been dancing with his fan and then he takes out his real sword. That is a dramatic moment, it could be the moment of his revenge, with Rensho right there. Then he stops himself.  saying “You are going to save me. Thank you”. When Atsumori can give up his attachment to his anger, they are both released. That is when Rensho’s story is over. Several times he says “thank you”.

James: If there were a continuation to Rensho’s story where would he go? Back to his monastery?

Happy Stone: He would continue on his journey and be in other Noh plays (laughter). Or maybe go to the home of that nice local man and take him up on his offer; after all, he has been up all night. It’s a new day.

(The Waki Happy Stone packs up her Tupperware and leaves the green room. Then James leaves. He has no text to speak but in case you’re wondering, he is thinking “Thank you, Happy Stone”.) 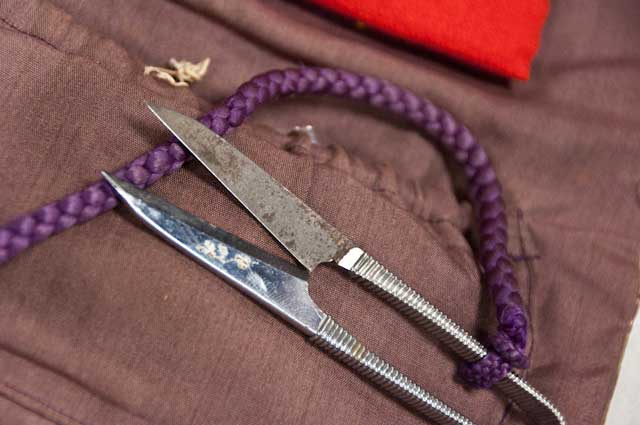